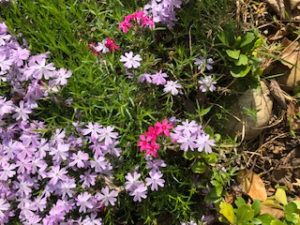 Each spring, visitors have the opportunity to stroll through the gardens of the historic Windover Heights District in Vienna. The annual Walk on the Hill will be held from 2 p.m.-5 p.m. on Sunday, April 28. Come and celebrate a few milestones stay  after 5 and meet VAS artists at reception at the Art Center later.

At Walk on the Hill, visitors get a rare glimpse into the historic district while the flowers are in full bloom. 47 properties and venues are featured on the tour. Information for visitors will be available at 277 Windover Avenue. A walking tour map is available here.

The Vienna Arts Society will also be hosting Rick Speight for a book signing of his book The Boys from Hicks Drive . Most of “The Boys” will be present for pictures and expanded stories. This book is a collection of exciting and true stories of six lifelong friends, The Boys From Hicks Drive in Vienna, Virginia, as they grew up during the most meteoric cultural and political turmoil in our nation’s history; the sixties and seventies. And what better place for childhood adventure than Vienna, the town on nearly every Top Ten list of Best Places to Live, and located near the power center of the universe¿Washington DC?The Boys began their odyssey on the day they met and it has continued for nearly sixty years consistently providing an endless and timeless source of entertainment whenever they get together and relive their youth.Share the adventures as you read about The Boys From Hicks Drive and how they deal with:¿SharkBoy-Did he really consume human flesh? ¿Igniting a cherry bomb outside the open bathroom window during a grouchy neighbor’s afternoon ritual.¿Launching bottle rockets at an unsuspecting neighbor’s home who thought they were under attack by federal agents¿Diverting traffic on a busy street through a neighbor’s driveway as they were enjoying a quiet family dinner¿Parking with a gorgeous date that gets interrupted by a very large, morality crazed woman in curlers and a MooMoo.¿Grave digging on Halloween¿ A near fatality of one of The Boys after being thrown from a bridge

Following the book signing, the Vienna Arts Society will be hosting a reception for the public celebrating our Rhapsody in Blue Exhibition in place at the VAS Art Center.